Win a New Chair in the #MyUglyChair Giveaway!

Do you have a chair that you can’t stand? One that makes your living room the eyesore of your house? This month we want to help you spruce up your décor with our #MyUglyChair Giveaway!

The contest will kick off on the GDF Twitter page (@GDFurniture) on May 2, 2014 at 8 a.m. PST and will run through June 2, midnight PST. Ready to ditch your #MyUglyChair once and for all?  If so enter our contest to win a brand spanking new chair.  Each step is worth one entry so if you do both, you'll double your chances to win! 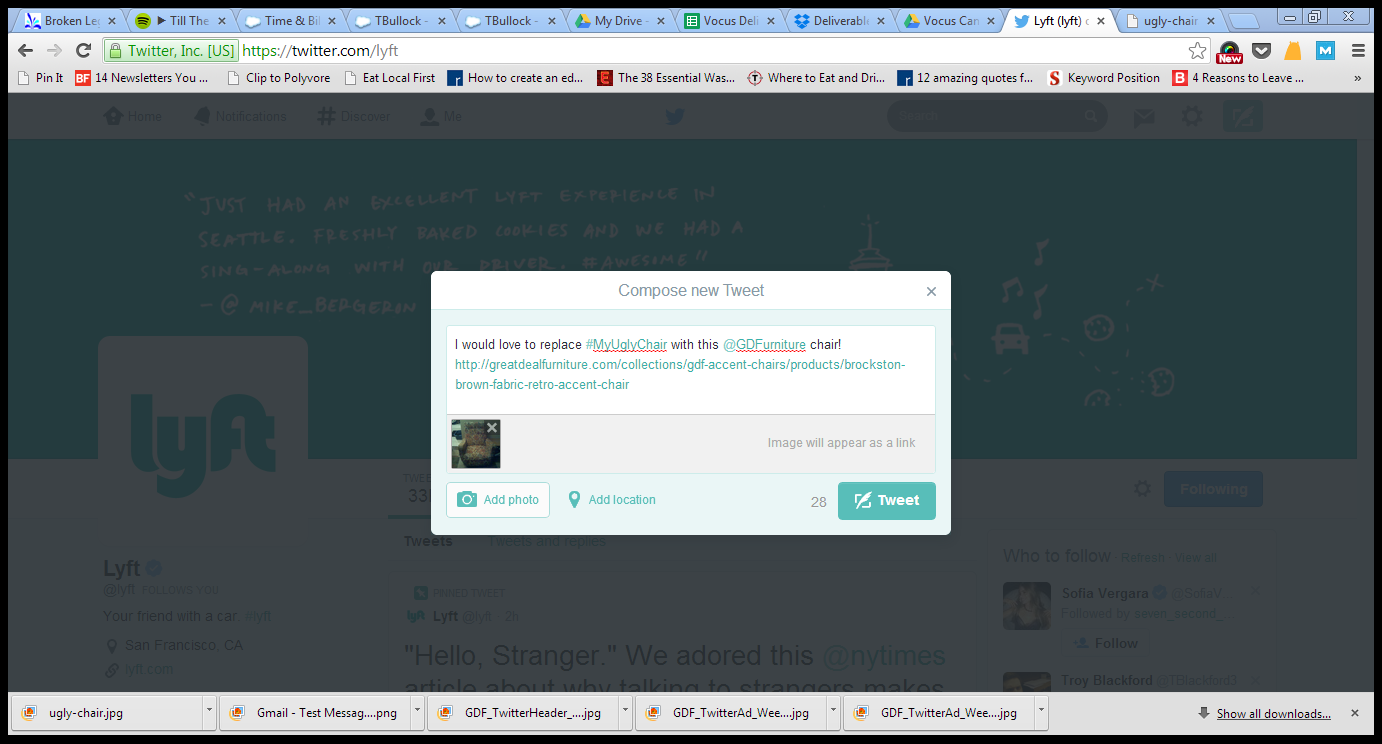 Limit one entry per person during the contest period. For full contest rules, see below!

NO PURCHASE OR PAYMENT OF ANY KIND IS NECESSARY TO ENTER OR WIN. Winners will be able to submit second choices if their first selection is no longer available.

The “#MyUglyChair” Giveaway is sponsored by Great Deal Furniture .This contest is governed by these official rules. By participating in the contest, each entrant agrees to abide by these Official Rules, including all eligibility requirements, and understands that the results of the contest, as determined by Sponsor and its agents, are final in all respects. The contest is subject to all federal, state and local laws and regulations and is void where prohibited by law.

ELIGIBILITY The Contest is open to legal residents of their respective countries where not prohibited by law, who are eighteen (18) years of age or older at the time of entry who have Internet access and a valid e-mail account prior to the beginning of the Contest Period. Sponsor has the right to verify the eligibility of each entrant.

CONTEST PERIOD The Contest begins on May 2, 2014 at 8 a.m. PST and ends on June 2, 2014 at midnight PST. (“Contest Period”). All entries (submissions) must be received on or before the time stated during that submission period. Sponsor reserves the right to extend or shorten the contest at their sole discretion.

HOW TO ENTER To enter, entrants must share a photo with the hashtag #MyUglyChair and a link to a Great Deal Furniture chair that they would like to replace it with during the contest period. One entry per person will be accepted during the Contest Period.

WINNER SELECTION All eligible entries received during the Submission Period will be gathered into a database at the end of the Submission Period. A winner will be chosen at random. The winner will be announced on June 15, 2014 on or about noon EST via Great Deal Furniture’s Facebook and Twitter accounts. Announcement and instructions for prize will be sent to the entrant’s social media account that was selected as the winning post. Each entrant is responsible for monitoring his/her Twitter and Facebook accounts for prize notification and receipt or other communications related to this contest. If a potential prize winner cannot be reached by Administrator (or Sponsor) within fifteen (15) days, using the contact information provided at the time of entry, or if the prize is returned as undeliverable, that potential prize winner shall forfeit the prize. Upon the request of the Sponsor, the potential winner may be required to return an Affidavit of Eligibility, Release and Prize Acceptance Form and IRS W-9 form. If a potential winner fails to comply with these official rules, that potential winner will be disqualified. Prizes may not be awarded if an insufficient number of eligible entries are received.

PRIZES: One Great Deal Furniture piece for the winning entrant. Maximum value is $700.

Terms and conditions may apply. Incidental expenses and all other costs and expenses which are not specifically listed as part of a prize in these Official Rules and which may be associated with the award, acceptance, receipt and use of all or any portion of the awarded prize are solely the responsibility of the respective prize winner. ALL FEDERAL, STATE AND LOCAL TAXES ASSOCIATED WITH THE RECEIPT OR USE OF ANY PRIZE IS SOLELY THE RESPONSIBILITY OF THE WINNER.

ADDITIONAL LIMITATIONS Prize is non-transferable. No substitution or cash equivalent of prizes is permitted. Sponsor and its respective parent, affiliate and subsidiary companies, agents, and representatives are not responsible for any typographical or other errors in the offer or administration of the Contest, including, but not limited to, errors in any printing or posting or these Official Rules, the selection and announcement of any winner, or the distribution of any prize. Any attempt to damage the content or operation of this Contest is unlawful and subject to possible legal action by Sponsor. Sponsor reserves the right to terminate, suspend or amend the Contest, without notice, and for any reason, including, without limitation, if Sponsor determines that the Contest cannot be conducted as planned or should a virus, bug, tampering or unauthorized intervention, technical failure or other cause beyond Sponsor’s control corrupt the administration, security, fairness, integrity or proper play of the Contest. In the event any tampering or unauthorized intervention may have occurred, Sponsor reserves the right to void suspect entries at issue. Sponsor and its respective parent, affiliate and subsidiary companies, agents, and representatives, and any telephone network or service providers, are not responsible for incorrect or inaccurate transcription of entry information, or for any human error, technical malfunction, lost or delayed data transmission, omission, interruption, deletion, line failure or malfunction of any telephone network, computer equipment or software, the inability to access any website or online service or any other error, human or otherwise.

PUBLICITY By participating, each entrant grants Sponsor permission to use his/her name, likeness or comments for publicity purposes without payment of additional consideration, except where prohibited by law.

Any questions regarding this contest should be directed to Great Deal Furniture at [email protected].

You have successfully subscribed!